JAWS is made up of what seems like a tough group of phenomenal women, who are dedicated to news. Women who believe in getting right and writing it well — no matter what the platform.

But when we come together once a year, it is wonderful to see the softer side of these women, who are diverse, eclectic and accomplished in so many other fields outside their professions. This quilt is a tribute to the softer side of JAWS.

It was sewn by JAWS legend, Betsy Wade, the first woman to be chief of the copy desk at the New York Times. Wade made it on an antique sewing machine as a celebration of the organization’s 20th anniversary.  Wade sewed together a historic two decades of JAWS T-shirts and put in the JAWS auction as a fundraiser in 2009.

That same year, former JAWS president Susy Schultz came to JAWS, looking to give back to an organization to which she had belonged for many years. To Schultz, JAWS was an extended family filled with friends, who had helped her make big changes in her career, which started at the Chicago Sun-Times. These were also the woman who had supported her through the tumult of a divorce. And on so many occasions, had helped her laugh, sing, dance and wrapped their strong arms around her to make her feel welcomed and appreciated.

Schultz decided to buy the quilt for $2,000 and make it a meaningful symbol of JAWS warmth. Schultz and the amazing team of JAWS leadership at the time, all felt that these tough Type A JAWS women rarely — if ever — acknowledge their rough times and so the quilt was a way to allow JAWS women to know even if you can’t ask for support, we are here for you.

It is a reminder during the year of what the JAWS women try to do for each other at CAMP or through the mentoring programs. It is also dedicated to not only its maker, Wade, but the late Eileen Shanahan, who was a New York Times reporter. Hired in 1962, Shanahan covered budgets and economic policy in the paper’s Washington bureau — the first woman reporter there to cover a beat other than the First Lady. She was described this way in her obit in The New York Times:

Shanahan was single-minded on the trail of a story and had a reputation for being sharp-tongued with officials. ”She yelled at bureaucrats who were uncooperative,” said Richard E. Mooney, who covered economics with her at The Times. A 1966 profile in Forbes magazine headlined ”Eileen, the Giant Killer,” described how she decided to write groundbreaking articles about abuses in the mutual fund industry.”

Yet, at the same time, this tenacious reporter was also a generous mentor to many reporters. A founding director of JAWS, she was also dedicated to social justice. She served as a mentor to so many, including Schultz, meeting with her at CAMP each year and calling during the year for check up between CAMPS. A veteran of juggling job and family, Shanahan offered Schultz (and so many others) not only career advice but such timeless tips as: “Kid, you remind me of me when I was young, but let me give you a piece of advice, you gotta know when to shutup,” and “no one ever died from a few dust bunnies under the couch” or “you heard of frozen foods? Use ‘em.”

I’ve always wished I knew Shanhan’s health was failing, so I could have gone to visit her in DC, rather than gone there for her funeral.

The quilt now travels each year to a different member of JAWS—presenting itself as something like a big JAWS hug to members who for some reason, may just need an extra dose of warmth and friendship. No, it is not a quilt that celebrates illness and adversity, but rather strength, grace and sisterhood.

The quilt has gone to the following JAWSdresses over the years: 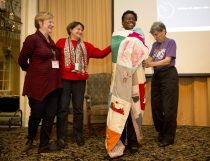 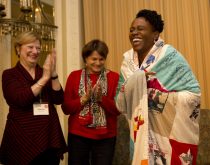 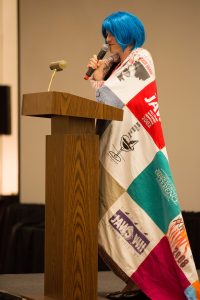