While online harassment has always been an issue, it has become a big topic among journalists recently, as the recent Gamergate debacle only underlined the importance of this discussion at CAMP. Veteran journalists Mary Curtis, Susy Schultz and Michele Weldon discussed the issue of harassment on the Internet, harassment prior to the Internet and ways to counter harassment.

Women in the session were asked to post on a corkboard an insulting or harassing comment left for them on a story. And every woman on the panel relayed a tale of harassment, threats or physical stalking.

END_OF_DOCUMENT_TOKEN_TO_BE_REPLACED

“Emote! It’s good to cry, but don’t stay there.” That was the message from Wendy Wallbridge as she comforted a tearful woman sharing the conflict between her true self and her false self with a room full of strangers. In that moment, we were not strangers, we were kindred spirits. It was the moment where we recognized that we all shared the same fears.

The woman’s testimony was part of an exercise at a CAMP session, “Elevating Your Voice: A New Roadmap for Self-Defined Success.” Wallbridge said that to be successful, we had to develop a different relationship with the negative voices in our head. So, as part of the session, we made a T-chart. On one side we listed all the negative things our false self told us about pursuing our dreams, and on the other, we listed the truth. She encouraged us to combat those negative voices with words from our true self. “Are you thinking about what you want, or the lack of it?” said Wallbridge.

END_OF_DOCUMENT_TOKEN_TO_BE_REPLACED

Shh! Don’t tell anyone I told you this, but the big secret to mentoring is asking for what you need. I know this for a fact. For the last 10 years, I have recruited mentors from various backgrounds, genders and ethnicities to guide me through life. This year, JAWS made that process even easier. Not only was I drawn to like-minded JAWdesses like a mosquito to water, but I was paired with a phenomenal female journalist. I was paired with Stacy-Marie Ishmael. She instantly made meeting me at CAMP a priority, and her commitment didn’t end at after one breakfast at the La Quinta Resort. Between BuzzFeed and the Financial Times, her time is limited, but I’m now on her schedule. I look at our newfound union and think, “Now, that’s how you do it.”

Mary Stutts, vice president of external affairs for Comcast, told CAMP attendees that many women don’t have mentors because they fail to ask. “Mentoring is conducive to developing future leaders,” says the mother of three.

END_OF_DOCUMENT_TOKEN_TO_BE_REPLACED

As the industrial model of conveying news via print and broadcast shares its space now with digital media, so do the 20th century’s benchmarks of newsroom ethics need to adjust to new ways of assessing the profession’s guiding principles. It doesn’t work to “simply apply the old rules to the new environment,” said Kelly McBride, who is vice president of academic programs at the Poynter Institute and led the session entitled “New Journalism Ethics” at JAWS CAMP. McBride is also co-editor of “The New Ethics of Journalism: Principles for the 21st Century.”

No licensing board sets standards for journalists to adhere to, unlike many professions. Instead, its ethics grow “from the bottom,” and thus have evolved in that way, too, McBride observed. Consumers of news then have those ethics as guiding principles that undergird the delivery of their news. With fairness and accuracy at the center of journalism’s mission, the standards — core values — that grew out of the common 20th century practice involved truth-telling, independence (from advertisers) and the minimization of harm.

END_OF_DOCUMENT_TOKEN_TO_BE_REPLACED

The numbers of women working in tech are low, and two JAWS panelists say the media’s coverage of women in tech isn’t doing much to give those numbers a boost.

“In journalism, people focus on catchy titles that are more controversial and potentially result in more people clicking, but a lot of those are negative,” said Alaina Percival, an adviser at CodePath, a mobile developer school for engineers.

Headlines like “Tech companies haven’t gotten past sexism 1.0” and “Why women leave tech: It’s the culture, not because ‘math is hard’” aren’t helping.

END_OF_DOCUMENT_TOKEN_TO_BE_REPLACED

Radio journalism is an art, and there has never been an easier opportunity to get involved because of podcasting. At JAWS CAMP 2014, radio journalism and podcast experts Gina Delvac and Katie McMurran went over a variety of information, from finding equipment, recording, editing software suggestions, and even distribution methods.

The session began with discussion over recording equipment. Delvac and McMurran suggested using XLR microphones similar to those used in normal recording studios, as well as headphones.

END_OF_DOCUMENT_TOKEN_TO_BE_REPLACED

Many journalists get into the profession to make a difference – but where the rubber hits the road is in execution and having freedom to pursue data analysis and spending time with sources, according to panelists at JAWS Conference and Mentoring Project (CAMP) in La Quinta, California.

Susan Smith Richardson, editor and publisher of The Chicago Reporter, said that social justice journalism is “a lot bigger” than just wanting to make a difference – “we all want to make a difference with our stories,” she said – but also examines structural inequalities in society, whether through data or human stores with the aim of trying to change policies or practices.

END_OF_DOCUMENT_TOKEN_TO_BE_REPLACED 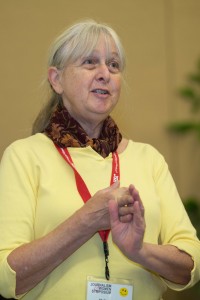 In 1997, Melissa Ludtke traveled to China and adopted a baby who had been abandoned by her birth parents as a result of the country’s one-child policy. For the next 16 years Ludtke raised her daughter Maya in her home state of Massachusetts. When Maya was almost 17 years old, she returned to China to find out what life would have been like had she grown up in the rural countryside.

Ludtke, the first-ever JAWS entreprenurial fellow, sent a team of bilingual videographers along with Maya and her orphanage crib neighbor Jennie to document their journey – and the results are her forthcoming iBook, “Touching Home in China: in search of missing girlhoods.” Ludtke shared the process of creating the interactive iBook on Nov. 2.

END_OF_DOCUMENT_TOKEN_TO_BE_REPLACED

“We’re in an era of chaos and opportunity in journalism — we’re going to talk about the opportunity part.”

It was a fitting way for Dawn Garcia to kick off Saturday’s Conference and Mentoring Project (CAMP) panel on fellowships, awards and collaborative projects: the “opportunity part” is what drives her role as managing director of the John S. Knight Journalism Fellowships program at Stanford University. Garcia corralled a chat with Michelle Holmes, VP of content for Alabama Media Group, Claudia Nuñez, founder and director of Migrahack, and Alison Fitzgerald, a reporter at the Center for Public Integrity.

END_OF_DOCUMENT_TOKEN_TO_BE_REPLACED

“People aren’t going to pay for your crap if it’s crap,” says Teresa Schmedding, ACES president and deputy managing editor for the Daily Herald in Chicago. According to Vultee’s research, readers care more about grammar than style.

END_OF_DOCUMENT_TOKEN_TO_BE_REPLACED

JAWS on Friday honored the hard-fought and enduring achievements of women, who were among its founding board of directors by establishing a fund committed to continuing the progress their actions set in motion. The JAWS Legacy Fund honors its formidable founding directors and supports continued JAWS programming.

END_OF_DOCUMENT_TOKEN_TO_BE_REPLACED

When online media company Gawker Media approached then-magazine editor Anna Holmes to start a women’s website in late 2006, Holmes says she was up for it – but scared.

“Maybe when you get fed up, you get more fearless,” said Holmes, speaking at the Saturday keynote dinner at the annual Journalism and Women Symposium Conference and Mentoring Project (CAMP) in Palm Springs, California. “But I wasn’t without fear.”

It was at a time when nobody Holmes knew was moving from print to Web, and when her work in celebrity and fashion reporting was paying the rent, but failing to satisfy her personally.

“It was very scary for me, and I felt very, very fearful,” she said.

END_OF_DOCUMENT_TOKEN_TO_BE_REPLACED

A love affair with Elvis Presley got Linda Deutsch her start in journalism.

Deutsch fell madly in love with Presley when she was a 12-year-old in New Jersey. Officials at Elvis headquarters gave her a list of potential fan club members members, and Deutsch began one of the first Elvis fan clubs in the United States. She used her Smith Corona typewriter to write a club newspaper, charging $1 in membership dues in the U.S. and $2 overseas.

“This was so much a prediction of what my career would become in a way,” Deutsch said Saturday at the Journalism and Women Symposium (JAWS) annual Conference and Mentoring Project (CAMP).

END_OF_DOCUMENT_TOKEN_TO_BE_REPLACED 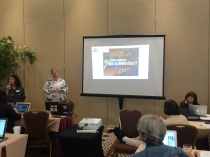 The inverted pyramid, a model made popular by newswire services and long taught by journalism schools, stresses putting the most important who-what-where-when-why information up at the top of stories. Though this model has long allowed editors to easily cut off less relevant chunks of information near the end, it can be dull, clunky and lose readers before they get to the end, according to a JAWS panel Oct. 30.

END_OF_DOCUMENT_TOKEN_TO_BE_REPLACED

In a wide-ranging interview Saturday, former executive editor of The New York Times Jill Abramson talked about her upcoming startup project and said she does not spend much time dwelling on the reason she was fired from The New York Times.

At a breakfast with about 200 JAWS members and the annual Conference and Mentoring Project (CAMP) in La Quinta, California, Abramson said that before she was fired by Publisher Arthur Sulzberger Jr., she was in discussions with CEO Mark Thompson and Sulzberger about her salary, which in 2011 was less than her predecessor’s salary in 2004.

END_OF_DOCUMENT_TOKEN_TO_BE_REPLACED

Piles of documents. Endless source lists. Months and months of research. Investigative reporting projects can be overwhelming, but they don’t have to be disorganized.

“Journalism is hard. It’s really hard,” said Rosemary Armao, a professor of journalism at the University at Albany, SUNY during a day-long Journalism and Women Symposium Confer

END_OF_DOCUMENT_TOKEN_TO_BE_REPLACED

The Conference and Mentoring Project has a stellar lineup of speakers and panelists for this year’s program. Learn more about the 2014 programming here. Check out these resources from CAMP.

END_OF_DOCUMENT_TOKEN_TO_BE_REPLACED

Join the discussion online about the Conference and Mentoring Project (CAMP) 2014 with these social media hashtags and handles of speakers, fellows and attendees. Follow the Journalism and Women Symposium on Twitter for updates about programs and sessions. Learn more about the workshops and panels on SCHED.

END_OF_DOCUMENT_TOKEN_TO_BE_REPLACED

We’re excited to see you at the annual Conference and Mentoring Project (CAMP) in California this year. Here are a few helpful answers to some of the most Frequently Asked Questions. See you soon!