As we approach the 20th anniversary of 9/11, it’s important for us to think about how we can cover it responsibly, especially in light of the anti-Muslim hate that many of Arab and Middle Eastern backgrounds can face. Thanks to JAWS member Jasmine Bager for courageously sharing her personal experience as a Saudi woman and as a journalist, and her perspective on how we can do better as an industry. She also shares useful guidelines produced collaboratively by four journalism associations: the Arab and Middle Eastern Journalists Association (AMEJA), the Asian American Journalists Association (AAJA), the National Association of Black Journalists (NABJ) and the South Asian Journalists Association (SAJA). If you’re a journalist covering 9/11 or any issues that affect MENA communities, I hope you will read this, share it and give it the thought and attention it deserves. – Jennifer Kho, JAWS president elect. 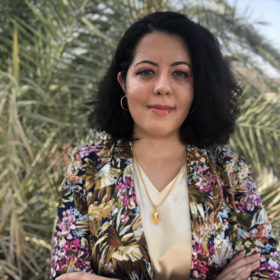 Where were you on that Tuesday 20 years ago? I was a teenager living in my parent’s house in Saudi Arabia. I remember the sound of the hair dryer as I tried to plead with my mother, drying her wet hair, to allow me to go to a party. My younger brother came in and I snapped at him to “wait your turn to speak to Mom!” He calmly said that they interrupted the cartoons for some big breaking news. The blow-dryer stopped and we all stood in front of the television. We watched the second plane fly into the building, live. We were all standing in silence. It was 4:03 p.m. At 5:49 p.m, we were still watching the news, but this time, we were all sitting down. The call to Maghreb prayer echoed in the suspended air. The sky got dark. We could hear the imam on the loudspeaker. He was telling us to pray for all of the victims who perished, and he asked for a special prayer for our allies in the United States. It was eerie. I didn’t go to the party.

Nobody was celebrating in the streets, which some Americans like Trump seemed to believe. At least where I was, there was a somber mood and it was not business as usual.

Though most Saudis reacted with the same horror as most Americans, there was and still is a vast gulf of knowledge between my two countries. Saudi Arabia and the United States have been allies for decades, but it seemed like we knew all about you and you still know so little about us.

This essay will urge you to consider thinking about Saudis as humans, not some monolithic, strange, exotic culture. It is painful, but I’ll be pulling from my personal story to create some kind of positive impact on the industry to which I supposedly belong.

Did you ever stop and wonder why you didn’t read more pieces in U.S. media written by Saudi journalists? Well, our ink can equal blood.

In 2018, months after Saudi journalist Jamal Khashoogi was brutally murdered, I wrote this essay. I mentioned how I moved to the U.S. shortly after 9/11 and hoped to help shape the larger conversations centered on Saudi Arabia. Jamal can’t be the only Saudi journalist you ever care about. Now that the hashtags have stopped trending, it is time to let us speak again, in our own words. Is the world ready to listen?

The simple truth is that many Saudis don’t trust American media to report our narratives because we have been burned before. That is why I wanted to try to include our voices in the larger space. I wanted to write some of our stories for us all to read. There are few Arabs in U.S. newsrooms and even fewer Saudi journos in U.S. publications. Those of us who tried to navigate that labyrinth have been pushed to a corner. PEN America recently quoted me in their report on online abuse because of the trolling I received as a result of my lineage. Many Saudis have been jailed for writing even tweets on the internet: Just search for Loujain Al-Hathloul and others like her. There are so many examples of Saudis, especially women, who have sacrificed their freedom to use a pen, or a keyboard. The more we Saudi voices publish in U.S. media, the less “exotic” our words become. We also may start to see that our stories matter on the global stage and that will allow us to be brave enough to start typing for the world to read.

One reason many Americans don’t know about us Saudis is that we haven’t allowed you in because it seemed to us that our world didn’t matter to you. That is because many U.S. newsrooms don’t yet see us as colleagues or friends. We are important only when we die.

At JAWS 2020 CAMP, I created a panel, Is This Story Worth My Life? During that discussion, moderated by Lucy Westcott from the Committee to Protect Journalists, we asked a question many journalists from marginalized communities need to ponder with each piece: Is it really worth it to report on this story? My answer: I really don’t know.

Whenever 9/11 comes around, I dread it. I usually go offline and don’t watch the news for at least the day before and the day after. When I studied journalism in the U.S., my college classroom, full of smart and eloquent writers, didn’t really seem to care about voices other than their own. The discussions were dedicated to vilifying “those Saudis” without taking a moment to ask a single Saudi voice, like mine. I never spoke up in class during those heated talks because it was triggering. Instead, I voiced my concerns in class assignments. Once, my professor read aloud my piece about living as a Saudi American in September without attributing it to me. Nobody knew that I was Saudi or that I had so many tangled thoughts and turbulent feelings on the topic. Because nobody bothered to talk to me. Nobody asked. And when I did raise my hand, I was never called on. I felt ashamed that I wasn’t strong enough to speak, as that quote says, even if my voice was shaking. I blamed myself for not having the courage, but it truly wasn’t my fault. It was a failure on all sides. Those of us who can lose our lives for words on a page, that was not a luxury we were ever allocated. And my professors, as much as I admired them, all were complacent. They did not let me feel like I was part of the conversation, and the hostile atmosphere created more fear in me. It was clear then that nobody there really cared.

I know now that people do care, and that is why I’m addressing you in this piece. As a reporter, you must be sensitive while reporting on a vulnerable population that already has to carry the emotional labor and burden for actions by individuals they had never met. Despite the so-called Muslim ban that former President Trump so vehemently campaigned for, his first international visit as president was to Saudi Arabia. That is not lost on me.

It is a complicated allyship. But we must not mistake regular Saudis for others who originated from the same land but who performed evil deeds. It also is important to note that Osama bin Laden was infamously exiled from his home country in 1991 and was stripped of his Saudi citizenship in 1994, years before 2001. He was no longer a Saudi citizen when the attacks happened. It is a technicality, but words matter. Facts matter. Don’t group me in with those men. We don’t come from the same place.

Two decades later, what have we learned collectively as journalists? How can we prevent further stigma from entering our pages? Let’s not keep letting history repeat itself.

During the pandemic, I returned to my home country after nearly eight years in New York City, but hope to report on and in both locations.

It has taken me two decades to finally come to terms with my disappointment in how Saudis are treated in the U.S. and to unapologetically say where I’m from without feeling the need to justify the actions of those I despise even more than you do. As a proud Saudi American journalist, I have lived and worked in both countries and hope to continue to. At the end of the day, however, my loyalty is to the truth. I believe in journalism.

Jasmine Bager is an independent journalist based between New York City and Saudi Arabia. She mostly writes about art and culture with a focus on women. She is available for freelance work and doesn’t want you to use that sorry excuse that you couldn’t find a Saudi voice to include in your next article. She can be reached @JasmineBager and JasmineBagerCruz@gmail.com.