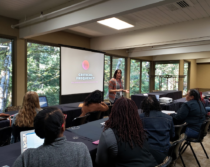 About 44 percent of Americans have listened to podcasts. That number is growing every year. In fact, most podcast listenership comes from women.

Use equipment like Zoom, Tascam, Marantz for mics and recording.

Go to www.transom.org for reviews on equipment.