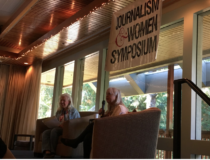 Melissa Ludtke’s successful 1978 legal battle over access for female reporters covering baseball came from years of experiencing institutional sexism and working toward incremental changes. The story of her career provides lessons for women in journalism today, including the importance of networking, perseverance, creative solutions, defining your narratives, and simply doing the work, no matter how small the task.

“I really took the gradualist approach,” Ludtke said. “But the coverage of me turned into ‘this pushy broad.'” Ludtke explained she didn’t know how to push back and define her own narrative herself, and admires how today, women are more active in defining their own narratives, like responding to criticism on social media.