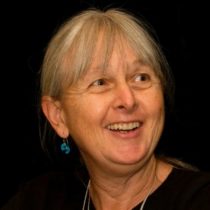 The Fran Lewine Memorial Interview is a cherished part of each year’s Conference and Mentoring Project (CAMP).

This year, Edith Lederer will be interviewing Melissa Ludtke, an award-winning journalist who broke barriers for women in sports journalism.

When Melissa Ludtke was 26 years old, she challenged Major League Baseball in federal court – and she won. The charge was gender discrimination. The result: By pursuing her rights under the Equal Protection Clause of the Fourteenth Amendment, women sports reporters gained equal access to team locker rooms where their male colleagues had worked for decades. From then on, girls who loved sports and wanted to report on games knew they could.

Melissa is an award-winning journalist who worked at Sports Illustrated, Time, CBS News and the Nieman Foundation for Journalism at Harvard University, where she edited Nieman Reports. She received the 2010 Yankee Quill Award for lifetime achievement as a journalist and was awarded fellowships at Harvard University, Radcliffe College, and the Columbia University’s Graduate School of Journalism where she studied and wrote about social issues with an emphasis on women, children and families. Random House published her book “On Our Own: Unmarried Motherhood in America,” in 1997 just after she’d adopted, as a single woman, her now 21-year old daughter Maya, a senior at Wellesley College majoring in environmental studies.

For the past three years, Melissa has been writing and producing the storytelling and digital curriculum project “Touching Home in China: in Search of Missing Girlhoods.” She was JAWS first entrepreneurial fellow in recognition of this project, and this fall she brought her project full circle with the print book publication of Touching Home in China.