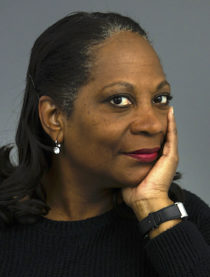 Alison Bethel McKenzie is the Executive Director of the Society of Professional Journalists (SPJ), the nation’s oldest, largest and most broad-based journalism organization with more than 8,000 members in nearly every state in the country.

Bethel McKenzie has more than 35 years of experience as an award-winning reporter, bureau chief, senior editor and media trainer. She has worked in senior-level positions at The Boston Globe, the Detroit News, Legal Times and the Nassau Guardian in The Bahamas as managing director.

Most recently, from July 2016-May 2017, Bethel McKenzie served as a visiting professor of print and investigative journalism for the Indian Institute of Journalism & New Media in Bangalore, India. She also spent a year in 2008-2009 in Accra, Ghana, for the Washington, D.C.-based International Center for Journalists as a Knight International Journalism Fellow, helping Ghanaian journalists improve their reporting skills in the run-up to the 2008 presidential election.

In August 2009, she joined the International Press Institute (IPI), based in Vienna, Austria, as deputy director before becoming the Institute’s Executive Director a year later.

Bethel McKenzie has also worked at The Miami Herald, The Los Angeles Times, Poughkeepsie Journal and the now-defunct State Times in Baton Rouge, Louisiana.
She is a co-founder and vice president of the board of directors for Caribbean Media Institute and acts as an advisor/consultant for the antillean.org news website in Barbados.
She is a former board member of AlJazeera America (N.Y.) and is a member and former board member of the National Press Club in Washington, D.C. She also serves as vice-president for the Lindsay Renea Dance Theatre in Youngstown, Ohio.