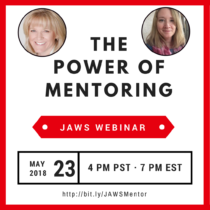 What’s kept you from becoming a mentor, or seeking out a mentor?

The cornerstone of JAWS is our mentoring program, which is open to all members. On May 23 at 7 PM EST/4 PM PST, we are offering a free webinar about the “Power of Mentoring,” where we will address your burning questions about the essentials for first-time mentors and mentees. Register here.

Mentoring is particularly vital for journalists who work independently and lack newsroom camarderie. Formal and informal mentors are sources of guidance, reassurance, and advice needed to navigate an industry with a long history of pay and leadership disparities.

This month’s webinar host, Caroline Comport, says a big factor can be women waiting until they are 100 percent ready, while men will apply for a promotion when they hit the 60 percent mark.

“So having a coach or mentor can really help women step into leadership positions sooner,” Comport says.

Caroline Comport is the founder of Narrative Quest, a leadership and personal development company with the mission of helping journalists and news media companies flourish.

Caroline’s coaching programs and workshops draw on principles from the fields of High Performance, Positive Psychology, and Appreciative Inquiry as well as her love of story—a passion that fueled her journey from editor in chief of her high school newspaper to an Emmy-award winning television producer for The KTLA Morning News, and Tribune Broadcasting’s Washington DC News Bureau.

While working with an international non-profit, Caroline guided the design of a coaching and leadership program that trained 61 journalists from more than 30 countries.

In addition to a bachelor’s in journalism from California State University, Northridge, a Master’s in Liberal Studies from Georgetown University, Caroline holds certifications in High Performance Coaching—a holistic methodology designed to help people accelerate their growth and develop new habits—and Appreciative Inquiry Facilitation—a research-based practice for fostering positive change at both the individual and organizational level.

JAWS board member Sarah Garrecht Gassen will also share her expertise on the webinar. Sarah is the Editorial Page Editor, award-winning columnist and host of the opinion podcast “The Point Being” at the Arizona Daily Star in Tucson, where she has taught at the University of Arizona School of Journalism for more than a decade. She is a mentor with JAWS, a mentor/editor with The OpEd Project and captain of the Arizona Regional Group.

She began her career at The Associated Press and is a regular contributor to public affairs radio and television programs. She manages university students who work in The Star’s newsroom in an apprentice journalist program and has been a faculty member with The New York Times Student Journalism Institute.