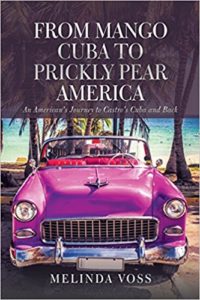 In March 2014, award-winning journalist Melinda Voss headed to the Miami airport to travel to Cuba, a country that had fascinated her since she was a girl growing up amid animated dinner conversations about the Cuban revolution, Castro’s leadership, and the missile crisis.

After her plane landed, she disembarked with thirty-one other Americans and prepared to explore Cubas complexity, its leaders, people, culture, and relationship with America. Offering a thoughtful glimpse of Cuban life, Voss not only interweaves interesting facts about Cubas history, customs, housing, education system, agriculture, health care, family life, and aging, but also provides perspective on the differences and similarities between American and Cuban cultures. While sharing valuable insight into landmarks such as the stately University of Havana, Santeria Cultural Center, Che Guevara’s tomb, Revolution Square, tobacco and organic farms, and community projects, Voss introduces others to an impressive array of Cuban musicians and artists and includes excerpts from unusually frank conversations with locals as well as Americans. From Mango Cuba to Prickly Pear America shares a concise and carefully researched comparison between two New World countries as a new and uncertain era of Cuban-American relations dawns.

“From Mango Cuba to Prickly Pear America – An American’s Journey to Castro’s Cuba and Back” is now available as an e-book or softcover volume from the usual bookselling platforms, such as Amazon, Kindle, and from the publisher, iUniverse. The book offers a concise and carefully researched comparison between two New World countries as a new and uncertain era of Cuban-American relations dawns.