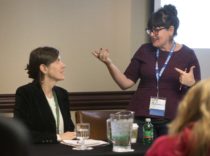 The statehouse can be one of the most important beats in journalism.

“What happens at the state level is very emblematic of what’s going on nationally,” according to Miranda Spivack, an independent journalist for Reveal from The Center for Investigative Reporting.

Spivack spoke at the CAMP 2017 panel on how to thrive in the statehouse press corps. She was joined by Ibby Caputo, a multimedia journalist who covered the Arkansas state legislature earlier this year, and Gwyneth Doland, a former New Mexico statehouse reporter who is now the senior editor for New Mexico Magazine.

Caputo started off the session with advice for new statehouse reporters. She said that when she first started covering the Arkansas legislature, she reached out to nonpartisan think tanks.

She said she asked them what issues they were focusing on, and their answers helped start her reporting. Caputo also suggested reaching out to state employees whose jobs are not tied to elections.

These employees can give historical context to reporters.

All the panelists said it is important for reporters to get to know who the power brokers are and what they care about.

But Caputo noted that these supposed power brokers aren’t always the ones to go to for details on policies.

“A lot of lawmakers don’t know what is in their own bills,” she said. It’s up to reporters to find out who writes the bills.

Caputo added that it’s important to ask questions at the start of the legislative session so that reporters can separate the “pomp and circumstance” of lawmaking from the actual news.

Spivack added that each state legislature has its own culture and language to learn.

A way to get beyond the legislators and bring stories to life is to go to hearings for bills. Spivack said reporters should get to know the people who come to testify at the hearings.

She added that it’s important for reporters to find “real human beings” to illustrate how government policies play out.

All three panelists cautioned reporters not to get caught up trying to beat others on the beat.

“Don’t be afraid to do stories that other people think are dumb. They aren’t,” Doland said.

Doland added that statehouse reporters should not shy away from math, especially when it comes to how legislators set the state budget. She added that the state’s budget gives away lots of important clues for reporters on what is on the minds of legislators.

“The budget is a moral document. It shows what a state prioritizes,” Doland said.

A slideshow with more tips on how to cover the statehouse can be found below: