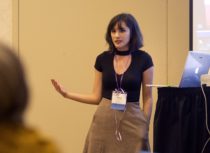 Going viral on Facebook takes more than just a catchy headline or outrageous content. For journalists who want to feature serious subjects and highlight important discussions of the day, Facebook videos must be carefully tailored to grab and keep hold of the audience.

At the panel on “How to go viral with videos on Facebook” at the 2017 Journalism and Women Symposium (JAWS) Camp, CNN multimedia journalist Tiara Chiaramonte urged attendees to think hard about the message they want to send the audience right from the first second.

“Why should I stay?” is the question a watcher will be asking from the moment they click, Tiara said.

While in a story you might want to draw the reader in and keep them scrolling further down the page, in a 30-second to one-and-a-half minute Facebook video it’s often better to put the best anecdote or most harrowing image at the top. This will draw people in and keep them watching longer.

But these videos need not be grand or visually complicated, Tiara said. It’s the emotion of the characters or the issue that will draw readers in. She gave the example of a video she recently produced in which Americans of color discussed being asked “No, where are you really from?” The video was simply produced and didn’t include any flashy graphics, but went viral because of the emotion of the respondents and the current salience of this question.

Until now, Facebook’s algorithm has been favoring shorter videos but that will soon change, Tiara said. Soon slightly longer videos (one to two-and-a-half minutes at most) will be favored because it gives Facebook time to insert an ad in the middle.

Facebook live videos, on the other hand, need to at least 10 to 20 minutes long, according to Tiara. The ones that go most viral are videos that give the reader access to something they’d otherwise miss: the backstage scene at a concert or up-close coverage during a weather event. Powerful characters (the “I survived” series), feel-good humanity stories (community do-gooders), social justice issues (protests, marches), and do-it-yourself and makeup are also popular.

For print journalists or those writing for a small market, Tiara said investigative or enterprise pieces could be promoted through video. But keep in mind few people will click on a “trailer” for a story that’s on another platform; unless you’re promoting the new Star Wars, it’s unlikely to drive traffic.

The best way to promote a print story through video is to retell the story in that few minutes with striking images and subtitles for any audio. And remember, this is a visual medium so the clarity and power of your images matter — no grainy video or photographs of compelling characters. For more tips, you can follow Tiara Chiaramonte on Prezi.