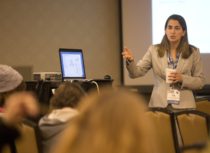 Before getting into the details, she explained that as newsrooms shrink they’re increasingly relying on freelancers, making this a great opportunity for those looking to try out investigative work. She also pointed to this article for some insight into the current state of the industry.

Walinchus gave tips ranging from the practical – such as using a smart pen so you don’t have to transcribe all your interviews – to going old school and hitting up your local library. Here are some of the main take-aways from her session:

Law library aka “the happiest sad place in the world”
Walinchus says although Google has improved its capacity for legal research in the recent past, few things are a substitute for walking up to a law librarian to find everything you might need to know about regulations or corporations. WestLaw and LexisNexis are the two databases she recommends, saying that using these you can not only find the regulations themselves, but also every reference or cross reference of the one you’re investigating.

Courts
Walinchus points out that while federal courts hear the big sexy cases that everyone hears about, state courts, which hear the highest volume of cases, can be a great place to look for story ideas and trends.

Suggested books and websites
“Predictably Irrational: The Hidden Forces That Shape Our Decisions” by Dan Ariely

General resources for investigative reporting
Walinchus told her audience,“learning to code is definitely a must,” and offered a few easy to understand resource for those who might think it’s too far outside of their wheelhouse.

Python for Kids: A Playful Introduction To Programming by Jason R. Briggs
Scraping for Journalists by Paul Bradshaw (Author)

She also offered up a few examples of great investigative reporting:

No Opinion: Lawyers Say Lack of Criminal Court Publishing Hurts Them, Their Clients – The Journal Record

They thought they were going to rehab. They ended up in chicken plants – Reveal

And last but not least, of course, “you should all be FOIA ninjas,” said Walinchus.