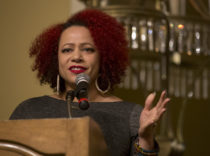 While Nikole Hannah-Jones may be one of the newest recipients of the MacArthur “genius grant” fellowship, the New York Times magazine investigative reporter has often been seen as a woman who is “not supposed to be here.”

In her keynote speech Saturday evening, Oct. 28, at the Journalism and Women Symposium’s 2017 CAMP, Nikole shared how she is the daughter of a black man born on a sharecropping farm in Greenwood, Mississippi in 1926, a time when black Southerners didn’t have rights. Her grandmother, who worked on cotton plantations, decided to leave an abusive relationship and take her children to Iowa hoping to escape segregation and discrimination. To her disappointment, segregation still awaited them and she spent her life cleaning the homes of white women.

A self-described nerd, Nikole subscribed to TIME and Newsweek in middle school, always curious about the world and why life was so different for her and other black people in Iowa. In high school, she began writing stories for the school paper that reflected the experiences of her fellow black students who came to the white school and felt that they didn’t belong.

“From the very first time I saw my byline, I was hooked,” Nikole said. Black students began reading the paper for her stories because they finally saw themselves represented.

Although she earned top grades, Nikole’s guidance counselor recommended she go to community college. She secretly applied to the University of Notre Dame and only told her counselor after she was accepted. In college, she studied history and American studies and was determined to work on racial justice issues. This was also the place Nikole was called the n word for the first time. Once again, she had to use other people’s perceptions of her and as fuel to prove them wrong.

After graduating, Nikole worked in college admissions and also at Subway. She noted that she worked two jobs until she was 30 years old just to pay the bills. These experiences were humbling and invaluable to her, because Nikole says, “There’s no person I can’t talk to and I don’t give any more esteem to the CEO of a company than the janitor who has to clean the building at night.”

Nikole eventually went back for her master’s in journalism and worked for newspapers. She was accused of being biased by a former employer when she asked for a recommendation for an internship. This was a time Nikole said many of her fellow journalists of color were leaving the industry and even she considered giving up out of frustration.

Fortunately, Nikole was offered a job at ProPublica, where she had the freedom to spend months pursuing topics she was passionate about such as housing and school segregation. From there, she joined the New York Times Magazine as a staff writer.

Now, Nikole is paying it forward as a founder of the Ida B. Wells Society, an organization dedicated to mentoring and training investigative reporters of color.

For anyone who wants to be an ally for diversity in the media, Nikole said, “White women, it’s not enough of to have solidarity. I implore you that you must acknowledge the particular struggle of your black and brown sisters.”

In light of recent news of sexual harassment in Hollywood and in the media industry, she reaffirmed the importance of groups like JAWS and encouraged every woman in the room to be the person they needed when they were first trying to make it. “Lots of people had their career derailed, especially women, because people didn’t believe in them.”

The speech ended with a loud chant led by Nikole of “we’re not supposed to be here but we’re f*ing here!”

To read more by Nikole, check out her New York Times pieces and look out for her book, “The Problem We All Live With,” due to be published in 2019.