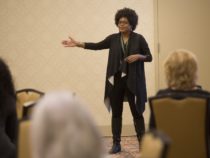 Journalists are continually asked to do more with less. That includes doing their own photography, which is a whole new experience for some.

Hilary Sloane is a photographer and writer living in the Mojave Desert. She recently returned from photographing Raleigh International, a nonprofit, and their work in Tanzania. She began the Tech Time: Photojournalism seminar at Journalism and Women Symposium’s 2017 CAMP by discussing components of mobile journalism, which she defined as “journalism that allows the reporter to use any tools that will capture and convey an in-depth story.”

Tatiana Flowers, a multimedia journalist for the Associated Press, said there will be certain situations where journalists can’t use traditional photography equipment. “You can put a phone in places where you can’t take your camera,” she said.

Hilary carries two phones and packed them for her Tanzanian trip. “I didn’t know how I’d carry my camera in Africa,” she said. “I have a little mic I bought for this camera. It’s learning the equipment that’s out there, and what’s going to work for you.”

Becoming a capable photographer can open up different avenues of work for journalists. Both Hilary and Tatiana covered photography basics. If you shoot photos with a camera, Tatiana suggests shooting in raw format. When using an iPhone, turn on the grid lines that divide the screen into three by three sections. These lines guide you to follow the rule of thirds, a practice that avoids photographing a subject directly in the middle of the frame.

Make sure to read your camera’s manual thoroughly. After taking photos, choose four of five of your favorites. Select photos that are in focus, don’t cut off limbs and are well composed. “You can clean up your photo, but you want to keep it as real as possible. Ethics are really really important,” Hilary says.

Before traveling to another country, Tatiana recommended researching that country’s photography and filming policies. She related an experience she had while in Morocco, completing an internship abroad program requirement while studying international reporting at the City University of New York’s Graduate School of Journalism.

“I was just shooting, and lots of police officers there would come up to me and my classmate and tell us that we couldn’t shoot where were,” she said. She and her classmate filled out paperwork and applied for the authorization, but they never received a response, so they decided to film anyway.

“One day we were in a really rural area, and I was shooting and a police officer asked us to come into the police station and they questioned us for two hours,” Tatiana said. The classmates were nearing the end of their trip and decided the risk being detained or jailed was too great.

If you are unsure about photography rules in foreign countries, she suggested asking people who have been there before: “What’s going to happen if I have this kind of equipment?”

A Dropbox link reviewing types of phones and cameras from the seminar is available here.