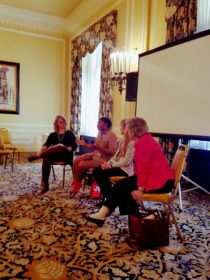 When Charisse Gibson has a date, she starts off with a disclaimer. The breaking news anchor for the Fox19 Now Morning Show in Cincinnati wants to make clear from the beginning what to expect when dating a working journalist.

“Unfortunately, a lot of my dates start off with me saying, ‘So I’m in TV and my contract is up in X amount of days or X amount of years,’” Gibson said.

Gibson, along with two other journalists, discussed the realities of balancing a personal life and a career during a panel Saturday afternoon, Oct. 28, at Journalism and Women Symposium’s annual conference at The Arlington Hotel Resort and Spa. The panel was moderated by Lisa Gillespie, a health care reporter for Louisville’s NPR affiliate WFPL 89.3.

The three women brought varying perspectives on work-life balance, including what it’s like to raise children or maintain a marriage while powering through phases of burnout as their careers progress.

Jennifer Oldham, an award-winning freelance journalist based in Denver, said she initially didn’t want to have children but changed her mind in her 30s as she walked along a white sand beach in Tanzania before climbing Mount Kilimanjaro. In that moment, the then-35-year-old decided she wanted to have a kid.

Oldham said having her husband around makes it easier for her to have children, but also to take time to relieve stress through a yoga class or a run.

“You need a partner that is behind you 100 percent and that understands your career,” Oldham said.

As a veteran journalist, Henriques also understands the trials that come with having a thriving career and managing a personal relationship.  The contributing writer for The New York Times has been married for 48 years and conquered trying times in the relationship, such as when she served as her husband’s caretaker through his battles with a chronic bowel disease.

Despite challenges that may come up, Henriques urged journalists to continue to pursue their career dreams and not let fear hold them back.

“Ask yourself: ‘What would I do if I weren’t frightened?’” Henriques said. ‘Which decision would I make if I knew I couldn’t fail?’”The three women also discussed their ways of coping with burning out in a job where demands continue to pile up. They advised reporters to set clear boundaries with supervisors about their work schedules and find healthy ways to de-stress.

Henriques admits a solid 10 hours of sleep does the trick for her, while Gibson will fly home if she needs a break.

Oldham finds peace from a realization she had when she reduced her work days to take care of her mom, who was sick with cancer.

“I realized during this period that there’s always another story,” Oldham said.  “So don’t kick yourself for missing something because your parents need you more, your kids need you more.”