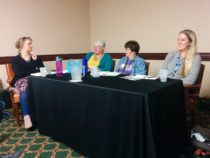 The first step in reporting on health care crises, said Mary Meehan, is “do no harm.” Mary — a journalist at the Ohio Valley Resource — used the Zika virus as an example.

“Your editors are going to want you to update every time a number changes, if it goes from 14 to 15 cases of Zika,” she said. “Try to resist that as much as possible because it doesn’t help.”

What does help, she explained, is sharing resources. In reporting on swine flu, for example, Mary remembered, “what was important was to tell people where to find vaccines.”

Mary shared these tips at a panel, “Going Deep: Reporting on Public Health Outbreaks,” on Oct. 28. The session, moderated by Lisa Gillespie — a health and science reporter at WFPL in Louisville, KY — was part of the Journalism and Women Symposium (JAWS) annual Conference and Mentoring Project (CAMP), held in Hot Springs, Ark. this year.

Panelist Justine Griffin, a reporter at the Tampa Bay Times, said part of health care reporting is to hold doctors and policymakers accountable by providing accurate information to the public. Justine cited the Tampa Bay Times’ annual issue breaking down the ins and outs of Medicare.

Leading up to the issue’s publication, Justine said, she receives a flood of phone calls from readers requesting clarification on policies that aren’t always broken down for Medicare enrollees.

“People rely on us to break down that jargon and explain to them what they need to know,” Justine said.

Liz Seegert, a longtime reporter on health care policy and aging, pointed out the lasting impact of long-standing social stigmas. Painting a fuller portrait of the social determinants of health — such as poverty, mental health, and education — builds a more substantial understanding of issues, particularly when it comes to the opioid epidemic, she said.

The other panelists agreed. Mary described the opioid epidemic as “a chronic relapsing disease…still looked at as a moral failing.” Changing these narratives through accurate reporting is key to challenging deeply held stigmas — and ultimately, garnering more public support for treatment, she said.

Getting out of the newsroom and into communities and facilities is also essential, panelists said. Justine recently visited a medical clinic in Pinellas County, Fla., where she observed and interviewed health care workers about their days.

What some take for granted in large metropolitan areas — like public transportation — doesn’t apply in more rural communities.

“That simple thing of being able to get in a car and go somewhere, it’s a really important piece of health care and poverty in general,” Mary said.

A large part of Liz’s beat — aging — is routinely ignored in health care coverage, she said. Fourteen percent of U.S. residents are 65 and older currently. By 2060, that will change to one in four people.

Yet “aging itself is becoming a public health crisis,” Liz said.

At its best, health care journalism approaches convoluted and jargon-ridden policies through human subjects. But, as the panelists stressed, it’s important to make people understand the consequences of going public with one’s story.

“Accountability,” said Justine, “is everything.”