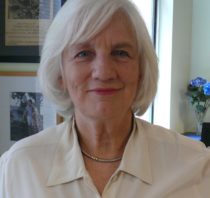 Over and over, Rita Henley Jensen‘s friends and colleagues describe her as “a force.” They call her formidable and extraordinary. Jensen used those strengths to fight her way out of poverty and into an award-winning career in journalism, working all the while to amplify women’s voices and advocate for their health and welfare.

Jensen, the founder of Women’s eNews and of the Jane Crow Project, died Oct. 18 of breast cancer, according to her daughter, Ariel Jensen-Vargas. She was 70.

Born Jan. 1, 1947 in Columbus, Ohio, Jensen built her success from an unlikely starting point: She was a teen mother with an abusive boyfriend who later became her abusive husband. She remained in that marriage for six years before leaving on the heels of her husband’s threats to kill her and their two daughters.

Alone, in her mid-20s and with children to feed, Jensen relied on welfare and a waitressing job and “tried not to eat much myself” in order to save precious pennies, as she recounted in an essay in the book “Nothing But the Truth So Help Me God: 73 Women on Life’s Transitions.” Determined to rise out of poverty, she borrowed money and applied for scholarships to attend the Ohio State University, beginning her college education at 25.

Jensen received her bachelor’s degree from Ohio State in 1976, then completed a Master’s at the Columbia Graduate School of Journalism in New York City.

Jensen’s award-winning journalism career began with her first job out of graduate school as a general assignment reporter for the Paterson News in Paterson, New Jersey. While at the newspaper for just two years, she won eight awards for her investigative journalism. She moved on to write for the Stamford Advocate, the American Lawyer, and the National Law Journal, as well as freelancing for news outlets including the New York Times, ABA Journal and Ms. Magazine, before creating the organization that became her crowning achievement.

Women’s eNews was born from Jensen’s desire to fill a hole in traditional media coverage of events and issues. “I was a prize-winning investigative reporter,” Jensen told Sheryl McCarthy in a 2011 interview for CUNY’s One on One, “but I began to say, ‘I have to focus on what’s going on with women, because no one else is.'”

Founded by Jensen as a project of the NOW Legal Defense and Education Fund in 1999, Women’s eNews became an independent organization in 2002. Jensen described to McCarthy the Women’s eNews approach to news coverage: “We will not endorse a candidate, but we will report the issues from the perspective of women’s interests. We had a recent piece about the health plans: Do they really cover the issues most concerned to women? We’ll cover the war as it concerns women. The thing that’s going around right now about children’s health coverage — that also covers pregnant women, but you haven’t heard a word of it in other media. So we’ll be covering that as that controversy continues.”

Women’s eNews has been widely honored with awards, including the Casey Medal for Meritorious Reporting. It was among the 100 Best Websites for Women named by Forbes in 2013, and About.com readers named it their “Favorite Women’s Rights Blog or Website” in 2012.

While serving as editor in chief at Women’s eNews, Jensen began a years-long investigative project focusing on maternal mortality rates among African American women. Those rates, she found, are substantially higher than they are for white women: Across the U.S., African-American women are three to four times more likely to die due to pregnancy and childbirth-related complications than white women. In some states, they’re as much as 14 times more likely to die of those causes than women of other races. It’s a statistic that has improved for women of other races in the past 100 years, but not for African American women.

Digging into the causes and repercussions of this phenomenon became a passion project for Jensen, and in 2016, she left Women’s eNews, retaining editor in chief emerita status, to work full time on what became the Jane Crow Project. A book, “Jane Crow: Why the Mothers Are Dying,” was in progress at the time of Jensen’s death.

Of Jensen’s work with the Jane Crow Project, Jensen-Vargas noted, “Her groundbreaking journalism can be indirectly attributed to the saving of African American lives by bringing  the high mortality rates of African American moms and babies in the U.S. to the attention of the U.N. and the New York Task Force, which has resulted in the establishment of a department in New York City specially appointed to resolve that issue.”

Jensen received many awards and honors for her work, including being named by the New York Daily News in 2004 as one of the “100 Women Who Shape Our City.” In 2016, the Women’s Economic Forum included Jensen among their Women of the Decade awards as an “Iconic Thought Leader of the Decade in Media.” Her other honors include the Columbia University Graduate School of Journalism Alumni award, the Alicia Patterson fellowship and the Lloyd P. Burns Public Service prize.

As Jensen’s career advanced, she never forgot the days when she struggled in an abusive marriage and then as a single mother. The experience led her to be an advocate for women, speaking frankly about her background — her bios always mentioned that she was a domestic abuse survivor — and pointing out injustices against women. In a 1995 article for Ms. Magazine, she said that her work only began with reporting the facts about women. It continued with fierce advocacy: “I think we have to raise hell any way we can.”

Jensen’s longtime friend and colleague, Susy Schultz, president of Public Narrative and founding president of the Association for Women Journalists – Chicago, spoke to Legacy.com about how Jensen’s impulse to raise hell made her a powerful force for women. “At times, people thought that Rita was difficult, but she was passionate, and she wanted to change the world. Really, difficult women often change the world.”

Jensen is survived by two daughters, Ariel Jensen-Vargas and Shasta Jensen, and four grandchildren, Anthony, Emily, Henry, and Jane. In a statement to Legacy.com, Jensen-Vargas noted, “Many friends and family members faithfully and loyally helped directly in her care during her decline. The irony is that she never got that gratitude until the end. And when she did, she was immensely gratified and pleased and touched by it.”

The family will announce services at a later date. To receive notifications of service details, friends may follow Jensen’s Caring Bridge page at https://www.caringbridge.org/visit/ritahenleyjensen.

Schultz, who had served on the JAWS board alongside Jensen, wrote poignantly of her friend in a message to the JAWS membership:

Rita was my friend and she was a mentor.

I’m sitting at my kitchen table, in a place she sat in April, where she ate dinner, argued with my husband about the role of police in a patriarchy and ultimately declared us her favorite Chicago hotel, marveling at the scented soap I had put her bathroom.

She noticed everything, even when you thought she wasn’t paying attention to anything.
She gave a talk during that visit at my nonprofit about the maternal mortality rate of African American women, telling all of us that the rate of death in childbirth has remained the same since 1916 and what must happen to change this pernicious underreported fact.

She went from welfare mother, victim of domestic violence to a legal columnist for the NYT. She founded a news service to look at issues through a gender lens and she took it global.

She was a passionate fighter — sometimes both of those things got in the way. She got angry and did not always realize she was fighting those who were her allies. We fought on several fronts and she let me have it full throttle. But I always knew, whatever she was arguing about, she was coming at it as an advocate for social justice, for my gender and for our world to be better.

She was a dear special person, who told amazing stories to the world about imbalance in race and gender. But also told lovely stories about her children and her grandchildren. She fought her cancer alongside her grandson, who fought his own cancer.

And she was generous with her advice and her experience. On many occasions, she explained the fundraising world, the Journalism world or the nonprofit world to me and she took great pains to lay bare her mistakes and the pitfalls she understood to ensure I never experienced the same pain. Yet, the pragmatist in her promised me that she was sure I would find my own pains, and would I please make sure to warn her of those?
She could seem scattered. We served on the JAWS board together and after our first meeting together, she asked me if I had my notes, because she noticed I was taking them throughout the meeting. When I said, yes, of course, she said with relief, ‘Good, I forgot I was secretary.’

But she was always so grounded in where injustice lay and how it must be rooted out. And she always carried in her heart, her family and her dear friends, one of whom was Betsy Wade, who fought shoulder to shoulder with Rita to keep Women’s E-News viable.

I remember when her cancer first reared its ugly head and I thought it would be kind to give Rita the JAWS quilt — the sign of our organization’s softer side, the quilt Betsy made, which we pass along each year to a sister who may need our support. It is always a surprise for the recipient. But knowing Rita, I knew I had to square it with her first. And it became a negotiation. Yes, she would accept it. But no, I could not mention this or talk about that and there was no way people should believe she was dying. She was going to beat cancer (which she did in that round). She was her typical hardass self. And yet, she also made it a point to tell me later how much she had cherished having the blanket that year.

She was forged from adversity. Yet, she never just fought for herself, she fought for all of us. I know she was there fighting for me long before I had a voice and I am so grateful I knew her and she believed in JAWS, even as it’s grown and changed in her lifetime.

Rest In Peace, my friend. I wish you had seen more progress on the issues you cared about so deeply. But I know things changed because you were here fighting. Thank you.

JAWS member Linnea Crowther is a senior writer at Legacy.com and was recently named Obituary Writer of the Year by The Society of Professional Obituary Writers. She kindly volunteered to compose this piece for JAWS, combining her skills with Susy Schultz’s beautiful remembrance to do justice to Rita’s memory. You can view a shorter version of this obituary at Legacy.com and leave personal messages in their Guest Book.