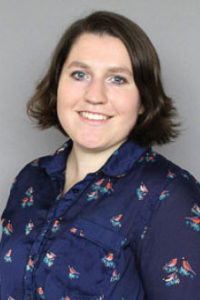 Amelia Brust is editor at Community Impact Newspaper, Katy edition. She has worked at daily and monthly newspapers, written online news and was a staff writer for her college paper The Temple News.

She grew up in Maryland, graduated from Temple University in 2014 with a bachelor’s degree in journalism and a minor in political science, and moved to Texas in 2015. Brust covers local news and reads stories about national politics, policy, entertainment, civil liberties, music, travel and women who are making waves in the world.

“If reincarnation exists, I’d come back in my next life as the lead singer of an art punk band, because I never had the guts to do that the first time around,” she says.

1. What are you looking forward to at CAMP in Hot Springs, Ark.?

Hearing stories from writers who have been in the field much longer than I have, because I mostly work with people my age and with the same experience as me.

2. What’s an interesting fact that not many people know about you?

I’ve performed at the Kennedy Center.

3. What project(s) are you working on?

My latest lead story is on a local school district bond—their second in three years—and whether it’s indicative of bigger issues that make such big-ticket expenditures inevitable.

4. What’s one thing you do to unplug and recharge?

4. Tell us the best advice you’ve received from a mentor or mentee.

Honestly, what’s mostly helpful is just having that third party to talk to when you’re unsure or confused by something. Odds are your judgement is somewhat clouded, so their emotionally detached advice is invaluable in that moment.