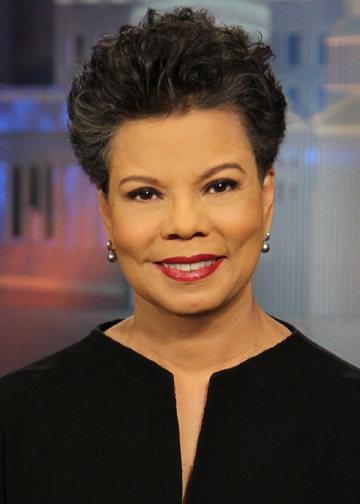 We’re very excited to announce that television news anchor Maureen Bunyan has agreed to be the Fran Lewine interviewee at CAMP this October!

Maureen Bunyan is a 44-year veteran of television news who anchored the 6 o’clock weeknight newscasts for ABC7/WJLA-TV from 1999 to 2017.

She is known as a leader in the newsroom and an advocate for women and minorities in journalism. She is a founder of the International Women’s Media Foundation which serves women in the media in 100 countries. She is also a founder of the National Association of Black Journalists (NABJ), where she was inducted into the NABJ Hall of Fame in January of 2014.

In recognition of her significant contributions to broadcasting, Ms. Bunyan has been honored with numerous professional and community service awards including being named “Washingtonian of the Year” in 1992. Additionally, she was inducted into the “Hall of Fame” of the Washington Chapter of the Society of Professional Journalists, “The Silver Circle” of the National Academy of Television Arts and Sciences (NATAS) and the Broadcast Pioneers Club of Washington. She has been awarded seven local Emmys, and the “Ted Yates Award,” given by NATAS to Washington, D.C. news broadcasters who are leaders in the profession. She was named “Journalist of the Year” by the National Association of Black Journalists and she received the annual “Immigrant Achievement Award” from the American Immigration Law Foundation in 2002.

In June of 2014, Ms. Bunyan was knighted and inducted into The Order of Orange-Nassau, a Dutch order of chivalry. The Order of Orange-Nassau is a chivalric honor given to those who deserve recognition for exemplary contributions to society. She was inducted for her longstanding commitment to build and strengthen ties between Aruba and the United States. Over the years, Bunyan has used her extensive network and experience as a journalist to mentor young Arubans and create educational opportunities with the Aruban Ministry of Education and American universities such as Harvard University. Her lifelong commitment and work have contributed to the benefit of Aruba’s social and cultural development.

Ms. Bunyan has an extensive record of service to the community. She is a board member of the International Women’s Media Foundation. She also serves on the National Advisory Board of the Casey Journalism Center on Children and Families, the Girl Scout Council of the Nation’s Capital Women’s Advisory Board and the Advisory Committee of Women in Film and Video; she is also a board member of Women of Washington.

Ms. Bunyan attended the University of Wisconsin-Milwaukee and Columbia University School of Journalism and holds a Master’s Degree from Harvard University Graduate School of Education.

She was born in Aruba and grew up in Southeastern Wisconsin. She is of Guyanese descent.

The Fran Lewine interview will be conducted by JAWS members Linda Deutsch and Edith Lederer. It is scheduled to take place Saturday, Oct. 28, at 9:30 a.m. You won’t want to miss it!

JAWS has been bringing powerful women to speak at CAMP every year since 1985. But that’s not all we do: CAMP offers professional development, training, inspiring speakers and an opportunity to support networking, mentoring and friendship among women in journalism.

So, join us at CAMP this year in Hot Springs, Ark., on Oct. 27-29, and meet Maureen and dozens more vibrant, influential and fun women. Along with our keynotes, we have a great lineup of conference programming as well as pre-conference workshops on podcasting and leadership. For more information, visit jaws.org/camp-2017 and register for CAMP at members.jaws.org/event/CAMP17.