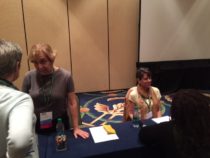 You’ll need to care about your book to the exclusion of everything else in your life — with the possible exception of family, according to Jane Isay, a former book editor turned author.

Jane joined Gail Ross, president of the Ross Yoon Literary Agency, at JAWS CAMP on Oct. 29 to share tips and valuable insider information for journalists looking to publish books. Jane and Gail, who describe themselves as the JAWS book publishing mascots, have been offering guidance to JAWS members at annual conferences for at least five years, according to Jane. Gail’s clients include writers such as Joby Warrick, winner of the 2016 Pulitzer Prize for general nonfiction. Jane, who worked as a book editor for over 40 years, has written three successful books in the past decade for Doubleday Publishing.

Although both women discussed the importance of a book idea passing the “table test,” the overriding message was the importance of passion. In the table test, a successful book idea must have four legs: a unique idea, a devoted and experienced agent, a platform or ideas for selling your book, and finally a great book proposal that allows you to strut your stuff and gets busy editors to miss their subway stops or cancel lunches to keep reading.

“If you’re not obsessed and passionate about writing your book, you won’t be able to live through the difficulties of writing and publishing it,” Jane said.

She also advised writers to feed their “lizard brain,” a term often used to describe the seat of emotional processes. “Creativity comes from the lizard brain,” Jane advises. “Do all you can to stimulate that process.”

Both women advised authors to spend time on the book proposal. They suggested starting with a thorough structure and chapter outline, then writing one complete chapter, but not the first. Instead, writers should focus on a later chapter, since the book’s description will have already provided this information.

The sample chapter should showcase the writer’s skills.

“A great proposal is like a closet containing eight of your most fantastic outfits that in any decade would make you look fabulous,” Gail said.

“Once you’ve completed the structure and outline, you are home,” Jane said.