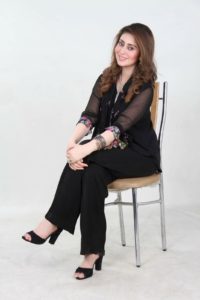 Among the talented women at JAWS CAMP this year is an international journalist who is paving the way for women in the media industry in her native Pakistan.

Mishal Bukhari is an award-winning news anchor for Neo @ 5. She is the host of her own news and current affairs program on Pakistan’s prominent news channels. She was a former subeditor and reporter for the Daily Express, and has covered major stories like the bombings of Pakistan’s security agency buildings, suicide blasts in Bhakkar, and corruption among government officials in Pakistan. Now, she volunteers with journalists and psychologists helping families in Pakistan affected by violence and terrorism.

1. How did you learn about JAWS?

I was planning to come to the U.S. for a personal trip and a very good friend of mine based here in the States suggested that I should join JAWS. It’s a good platform for women journalists. So I said “why not?” I sent an email out to apply for the conference and I was given a warm welcome. They invited me as a guest and that is such an honor for me.

2. What did you hope to get out of this experience?

I want to do something in Pakistan for women journalists. We don’t have any platform like this. I don’t know how it is in the U.S. but in Pakistan, women are not that helpful to other women, there is a jealously kind of thing. But here I have experienced a different thing, women are so much cooperative and helpful for each other. This has really inspired me. If we can have a collaboration and start a regional JAWS event. I would like to keep in touch with more women journalists in the U.S. so we can have some kind of professional exchange programs in the future. We can send Pakistani journalists here. We can invite U.S. journalists to Pakistan.

3. What is your most memorable experience here at JAWS CAMP 2016 so far?

The seriousness and passion that I’ve seen in the women here are amazing. The best thing is that they think about others — they want to empower women. They want to help give a platform for women in journalism. In journalism, especially in television, we have that pressure in our heads, and we are working all the time, even when we are off, we are still in journalism mode sometimes. We need some kind of a break. This conference is a great break. You are learning and at the same time you’re having a great time. I enjoy meeting different people, different women, listening to different opinions, learning different cultures.

4. What should people understand about women and journalism in Pakistan?

In Pakistan it’s not easy to be a media person when you are a woman because women of Pakistan are not given those opportunities as compared to men. It’s a male-dominated society. You need to work double that a man does. They think that every woman who is successful has gone through a shortcut. They are not considered talented as men are, so that is the biggest hurdle. It’s like a taboo wanting to work for media. There are many women who are making it, who are fighting, they have empowered themselves. Very confident outgoing and outspoken. It’s a big struggle in my life, but now with the position I have working for a news channel and I’m doing my own current affairs-based program.

5. What are some things you want fellow journalists in the U.S. to learn about your country?

Pakistan is beautiful, Pakistani people are loving. I don’t know the perception of Pakistan in the U.S., but it’s unfortunate that Pakistan is being known for terrorism or the Taliban and it is not like that. This is just the perception that is generally made. We are peaceful people. Women are very hardworking in Pakistan. If they are given the opportunities, the sky’s the limit. They are equally talented people; even with the journalism we are doing with limited resources, it’s commendable. When I come here and I see the opportunities, the freedom, the safety and security. One can travel easily across the country. We can’t do that, as we are always concerned with traveling from one city to another as a woman. So it’s difficult working and living in Pakistan. We are struggling, and this is something I want to tell the world.

6. How can people connect with you?