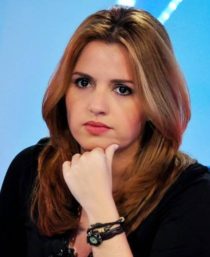 How did you learn about JAWS?

Kathy Bonk is an activist and a leader in all this and I met her on a trip to Havana. We were at a lunch where we talked about media and Cuba and the role of women and she invited me and made it happen.

What do you hope to get out of this experience?

As I’m not American, I hope to get a different perspective. My reality as a journalist is different, it’s not as sexist, which is not to say that there isn’t male chauvinism, but it’s different. Of course, meeting people, networking, it’s about that. Women should help other women.

What are some strategies you’ve heard that you can take back to your country?

It’s early for that question! [Laughs] The idea of resistance to so much stereotyping, how the role of women is very hard here. How we are victims and don’t know it. As I said, I come from a different perspective. Women in Cuba are the stars in journalism. I would like to create a Cuban JAWS and that’s going to mean raising consciousness.

What has been your favorite part of JAWS?

Meeting new people and learning about social media. I’m looking forward to “Lessons Learned From Covering the 2016 Campaign.” I’m in charge of U.S. politics and it’s a challenge to explain what should be a big deal for my audience.

What should the women at JAWS understand about women in journalism in Cuba?

One is that we earn the same as men. It’s not a lot of salary but it’s the same. There’s no sexual profiling in getting jobs. Women can make as much tough coverage as men can. The idea that, because we’re women, we are doing different jobs from men is a total construction. That’s something that my country is an example of.