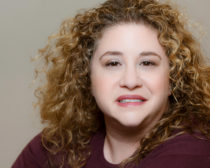 My favorite professor told me more than 20 years ago that to be a good journalist and a good consumer of news, you had to study bylines. Learn what different journalists stand for and learn who you trust. What I love about JAWS is that it has enabled me to go even further, to meet the women behind so many of the bylines I have read and get to know them and trust them and to be part of a community that includes them.

As we make our way through an unprecedented presidential election year, I know so many of the bylines because I’ve heard them introduce themselves at CAMP in Texas or Vermont or California. I’ve sat with them at breakfast or listened when they spoke on a panel.

JAWS gives me a professional network of women to rely on for advice and support, but it has also provides a frame of reference to be a better news consumer.

In 2016, when the media is as much a part of the election story as any of the candidates, it is critical to know whose story to trust. Because of JAWS, I am better informed.

When I saw a headline this week about an Illinois delegate to the Republican National Convention being ejected from the delegation at the convention, I might have skipped over it. But I saw that one of the bylines on the story was Lynn Sweet of the Chicago Sun-Times.

At that point, it became a must-read, because I knew I would learn something. I had no question about the story. I knew the integrity of the woman behind the byline. JAWS gave me that.

As I’ve watched the convention and related news this week, with social media going alongside the broadcast, I’ve seen tweets from members Jodi Enda and Caitlin Huey-Burns, among the most visible women covering the election. JAWS gives me a connection to the messengers and the message.

The stories coming over the transom via the listserv and social media by Sandra Fish, Angela Greiling Keane and Mary C. Curtis, among others too numerous to name, bring the biggest political story of our generation to life – and I know that if I had questions, I could reach out to any of them for answers.

I love that this organization provides a place in this professional community and a foundation of friends, sounding boards and mentors to rely on and turn to for advice and support, sources and resources. It also helps me do my job better and stay well informed.

It is my hope, as JAWS board member and officer, that this group can offer similar benefits to everyone who comes to it and that we can all help one another be the best journalists and news consumers we can be, as well as the best human beings.