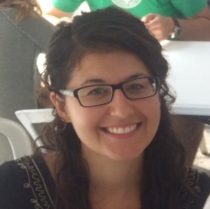 Mary Diduch is a staff writer at The (Bergen) Record newspaper in New Jersey. She has covered a variety of municipalities there since 2013. In 2014, she was named Rookie of the Year by two press groups in the state. Before that, she served as an editorial assistant on the business desk.

She earned undergraduate degrees in journalism and political science in 2012 from Rutgers University, where she served as editor-in-chief of the award-winning student paper, The Daily Targum. She also wrote a thesis that examined how the press covers suicide.