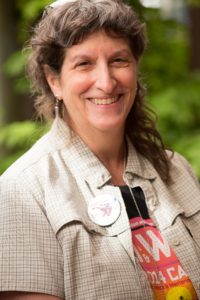 By Merrill Perlman, JAWS Board Member

We’ve all heard the horror stories: A woman is harassed in the workplace, or complains about unfair treatment. Instead of the situation’s being remedied, SHE is punished, shunned, fired or made to feel so uncomfortable that she eventually leaves, even if others acknowledge the problem. Her calling out the problem becomes the problem more than the problem itself.

It’s not fair, it’s not right, and it’s not legal. But it happens.

So what to do? There are ways to fight harassment in the workplace (and online). It’s one of the many topics that will be covered at this year’s Conference and Mentoring Project (CAMP), to be held Oct. 28 to 30 at the Hotel Roanoke and Conference Center in Virginia. In addition to panels like this, we plan discussions of stresses for journalists face, whether in the newsroom or on an international beat.

Details on CAMP registration will be available soon. But start planning to attend now.

A close cousin of harassment is inappropriate or insensitive language. Sometimes it’s against us, when someone especially online criticizes something we’ve written with sexist, racist, homophobic or other offensive language, rather than focusing on the content. But sometimes writers use terms without thinking how they might be received. If you’ve been watching our listserv on Google Groups, you’ve seen discussions of inclusive language for transgenders.

A number of affinity organizations have created their own style guides, some of which may not be appropriate for your publication, depending on audience, because they lean too far into advocacy. The Associated Press Stylebook has been catching up on issues dealing with gender identity, mental illness, suicide and the like, though it is not comprehensive. A more recent and up-to-date guide, called simply “The Diversity Style Guide,” was developed in part by JAWdess Rachele Kanigel for the Center for Integration and Improvement of Journalism at San Francisco State University. In addition to its own recommendations, it also includes links to many the other style guides out there, including those by NABJ, AAJA and NLGJA.

A style guide is useful only if a writer is aware of it, decides how to use it, and then does use it. But it doesn’t substitute for the writer’s own awareness of the power of words, and the way it’s audience uses them. That sensitivity to the people we cover, work with and talk with something only each of us can develop. Ask yourself whether you would be offended by a term or description you want to use, and ask the person you’re quoting how best to refer to them.

JAWS embraces diversity in all its forms — race, gender, religion, socioeconomic status, nationality, political leanings, etc. And it’s a fabulous place to learn how to avoid not just being harassed, but also being perceived as doing the harassing.