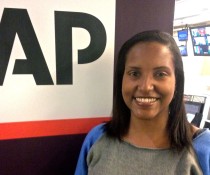 Claritza Jiménez is a television news producer and video journalist. She produces international news as part of the Latin America team at Associated Press Television News (APTN) in Washington, D.C. Some of the biggest stories she has worked on include the shift in U.S.-Cuba diplomatic relations and the election of Pope Francis.

Jiménez, who is a native Spanish speaker, started her journalism career at the CBS stations in Chicago and Dallas. She was awarded an Investigative Journalism Fellowship at American University’s School of Communication, where she earned a Master of Arts in journalism.