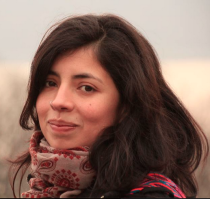 Camila Osorio is a Colombian journalist based in New York City. She is a reporter for the Latin America News Dispatch and a graduate student at New York University in Journalism & Latin American Studies. She is currently developing a project on land grabbings in Colombia, focusing on two companies that benefited from paramilitary violence and the displacement of small peasants.

As a former journalist for the website La Silla Vacía, Osorio covered women and student movements, left-wing parties, and legislation aiming to bring justice and reparations for the victims of Colombia’s armed conflict. She has also published her work on Latino immigrants in New York City for WNYC and F2W, and some articles on land tenure and sexual violence for the South African websites Ground UP and africasacountry.com.

Osorio is a proud feminist, and is looking to JAWS to figure out how to make feminism and journalism work together.