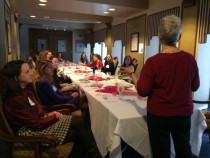 JAWS D.C.: About 20 JAWdesses and potential new members gathered at the National Press Club on April 2 to learn about an amazing 19th-century American journalist named Eliza Scidmore. Among her many accomplishments, after spending time in Japan, Scidmore was the first to propose planting cherry blossom trees in a national park along the Potomac in the late 1880s.  Her vision was not to be realized until nearly 30 years later. Local JAWS member Diana Parsell presented the fascinating story of Scidmore’s life, work and travels as an independent woman ahead of her time. Diana is preparing a biography of Scidmore tentatively titled “A Great Blooming.”

JAWS South Florida: Nancy Beth Jackson, Erin Siegal McIntyre, Jessica Weiss, and Judy Miller are just a few of the members who met up for the first South Florida regional gathering this month.