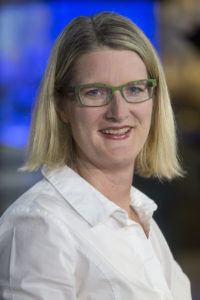 As an award-winning journalist, Greiling Keane has covered the White House, politics, regulation, autos, rail, Washington’s lobbying industry and the Postal Service. She has led coverage of automotive recalls, transportation crashes and postal reform. She also contributes to Bloomberg BusinessWeek, Bloomberg Television and the Political Capital blog. She appears on outside media including NPR and C-SPAN and is a frequent speaker on panels about journalism.

Greiling Keane was the 2013 National Press Club president, where she increased membership for the first time in more than a decade at the $13 million organization and served as the primary spokesperson for the club on topics, including international and domestic press freedom. She represented the club in a meeting with the U.S. attorney general on press freedom concerns and moderated dozens of events with guests, including heads of state, corporate CEOs, entertainers, athletes, cabinet secretaries and politicians. As Press Club president, Greiling Keane focused on press freedom issues and on highlighting women as newsmakers and in journalism.

She was a finalist for a 2012 Gerald Loeb Award for business journalism and won the Washington Automotive Press Association Golden Quill award in 2013.

Greiling Keane serves on the board of the non-profit National Press Club Journalism, has been a member of Journalism and Women Symposium since 2003 and has been a Paul Miller Washington Reporting Fellow. Before joining Bloomberg, Greiling Keane was an associate editor for Traffic World, a trade magazine covering freight transportation, and a Washington correspondent for the Small Newspaper Group.

She earned a bachelor of journalism from the University of Missouri. She lives in Washington with her husband and daughter.